The Nashville LGBT Chamber received a $25,000 grant from Metro Nashville in June and a $2,500 grant from Wells Fargo in August, to grow and certify LGBT owned businesses. Each month the Chamber will highlight one of our members that already is an LGBTBE (LGBT Business Enterprise) or is in the process of getting certification. To find out more about certification, contact the Chamber.

It’s a summer Friday afternoon and downtown Nashville is bustling with tourists. A crowd of visitors has wandered into the newly opened D’Andrews Bakery & Café for a light lunch. They find seats among a few locals enjoying coffee and pastries while pecking away on their laptops. The staff welcome their customers with warm smiles and greetings, but the first thing to grab their attention is the array of pastries set out before them in the display case.

The display reflects owner David Andrews’ vision for his bakery café—a modern bakery with a Southern sensibility. Andrews and his team delight their customers with creative twists on classic pastries that are “high-end, but approachable.” They include a Jack Daniel’s Honey Cream & Chocolate Brownie, a S’more Croissant with Milk Chocolate Mousse, and a Tiramisu éclair.

Andrews is pleased with foot traffic so far, and business is ahead of his ramp-up plan for the first few months, which is impressive since it’s based primarily on word of mouth from satisfied customers and Instagram is their only means of promotion.

The location is perfect to lure in tourists, as well as to serve as a meeting spot for locals working downtown. D’Andrews is located right next to the downtown library. Andrews says he was looking for a spot downtown and management of the Cumberland was looking for an amenity to offer their tenants. His vision for his bakery and café seemed like the perfect fit.

Andrews was born and raised in Nashville but spent thirteen years in New York, honing his skills at restaurants such as the Gotham Bar & Grill and the Kimberly Hotel. Andrews loved New York, but it was time to come home to Nashville, where he could draw upon all his experience in establishing a place of his own. 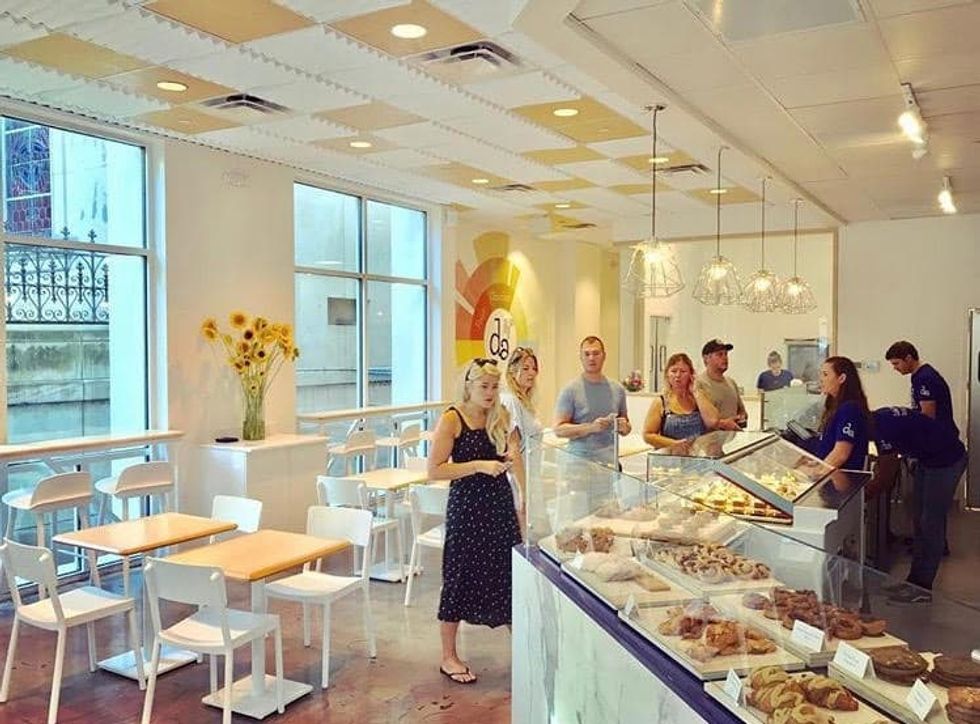 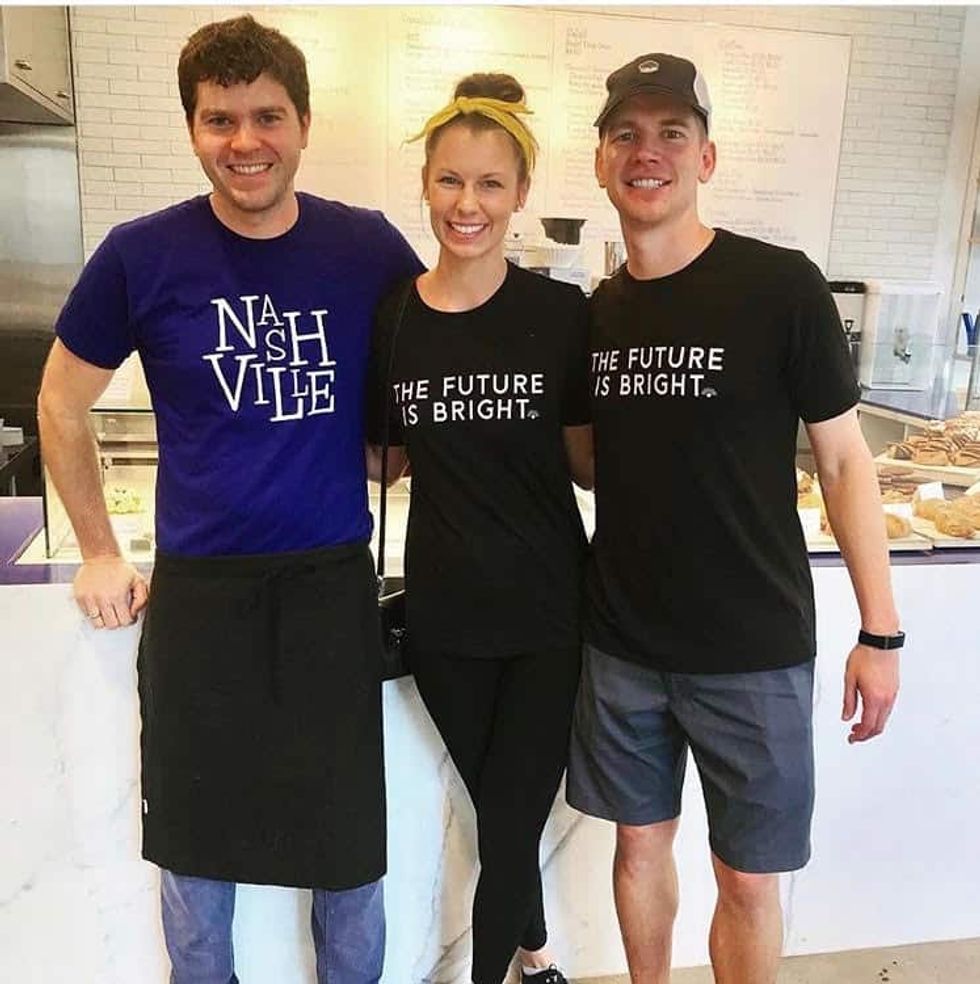 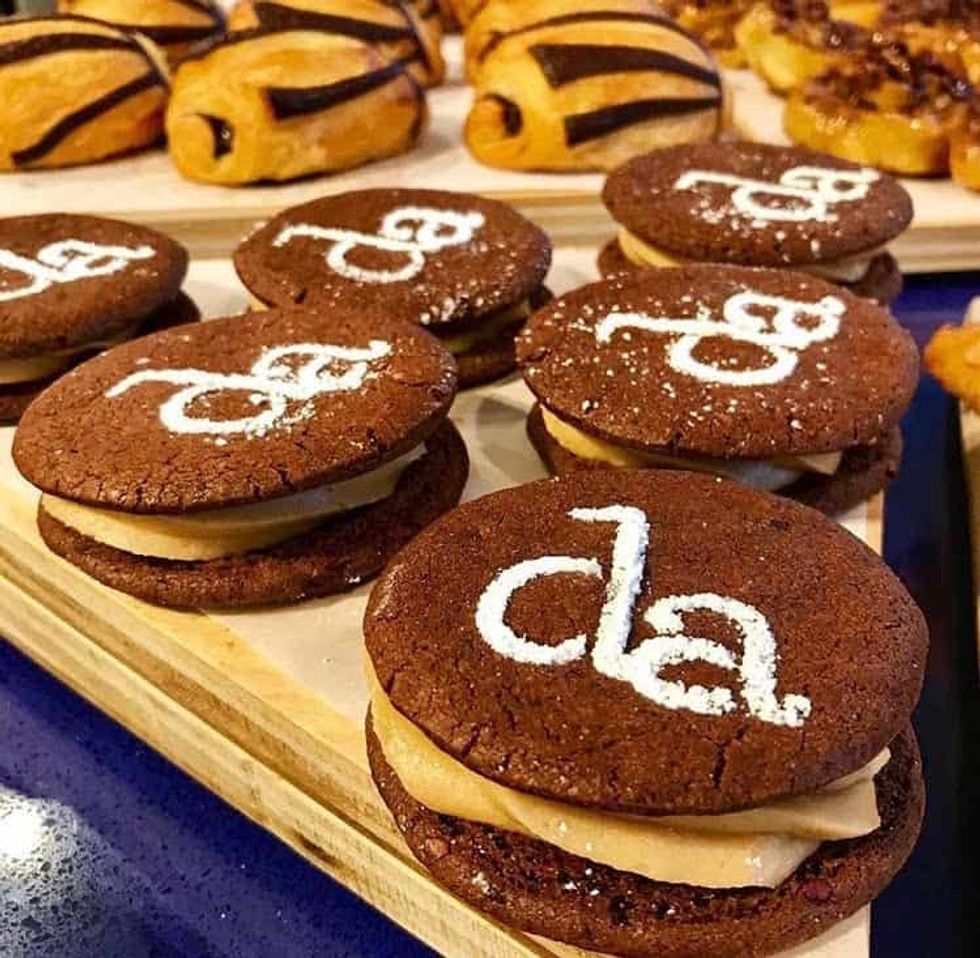 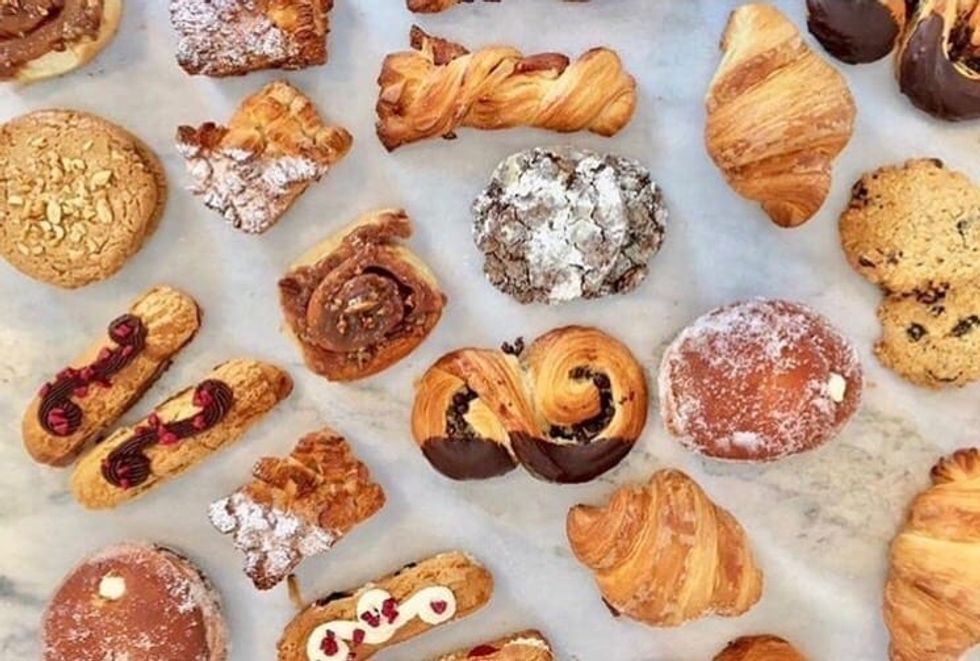 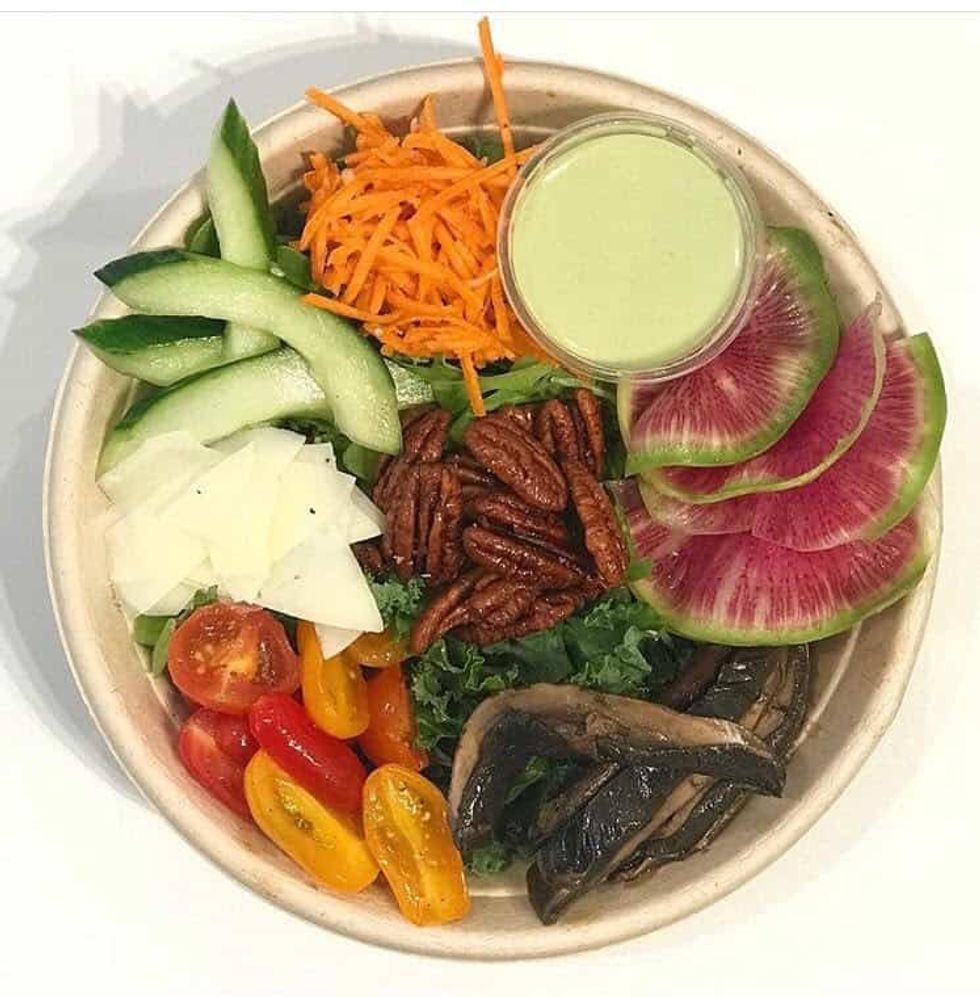 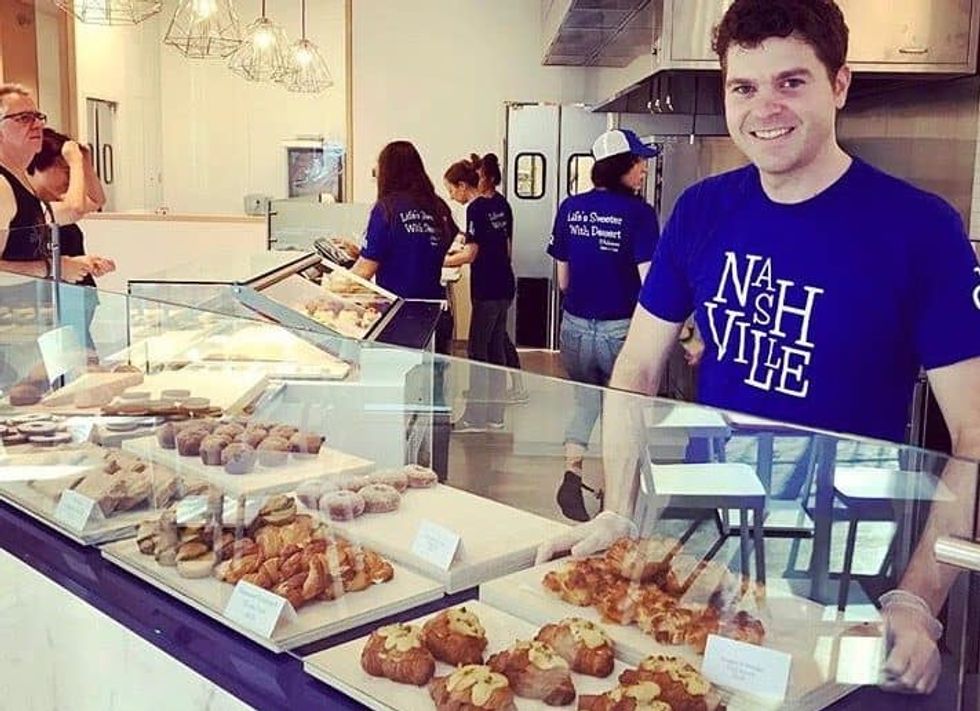 “Whenever I would come home to Nashville for holidays,” Andrews said, “I was always surprised by the lack of great bakeries. Yes, we have our share of cookie/cupcake and donut shops, but few places to get freshly made croissants, eclairs, and brioche fruit tarts. I knew if I could find the right space, Nashville would embrace my new style of bakery.”

While Andrews doesn’t consider himself disadvantaged in any way, he is proud to have a gay-owned business, and NGLCC certification opens up opportunities in the very competitive restaurant world. It allows him to compete for the catering dollars of larger, more established businesses.

There are only a few requirements that must be met to qualify for NGLCC certification: the business must be majority owned owned, operated, managed, and controlled by an LGBT person or persons who are either U.S. citizens or lawful permanent residents, be headquartered & formed in the U.S., and exercises independence from any non-LGBT business enterprise.

Andrews decided to invest the time in getting the NGLCC certification before the restaurant opened. He figured once they were open for business, his days would be full serving his guests. But the process was surprisingly easy and took less time than he originally thought.

“The first step is that you have to prove that you’re gay,” Andrews said, laughing. His marriage license to husband Matt Paco met that requirement. Andrews says he already had the rest of the documentation needed for the entire process, because he keeps these records in running his business. Lisa Howe reviewed his business plan and quizzed him about the business, ensuring that the bakery would meet the requirements to be LGBT certified. The time required was just a couple of hours over a couple of days.

Andrews says he’s already seeing advantages to becoming certified as an LGBTBE. For example, he’s received information about the 2019 NFL Draft that’s coming to Nashville in April.  The event is expected to draw up to 25,000 out-of-town visitors, which will generate a significant number of hotel bookings and catered events, as well as throngs of hungry tourists. His LGBTBE certification provides him an advantage in competing for business coming to town.

While Andrews is looking forward to leveraging his LGBTBE certification and Nashville LGBT Chamber membership to grow his business, he knows success starts with the amazing food he offers his guests. His Number 1 rule is, “We make and bake everything we sell in the shop”.

Andrews is especially proud that he makes every bun for his breakfast sandwiches and every loaf of bread for his lunch sandwiches.  He uses a versatile focaccia recipe that he has modified to fit his needs.  He also makes his own ricotta for his Tennessee Prosciutto Twist, the white chocolate decoration for his carrot cake, and the mayonnaise for all his sandwiches. He even roasts his own turkey, chicken, and roast beef: “No Boars Head in my shop,” he exclaimed.

The bakery is also becoming known as the only place downtown where you can make your own salad. “People love having the choice of what they put on their salads. They especially appreciate that we make all our own salad dressings, green goddess being my favorite”.

Having created many birthday and wedding cakes at the hotel in New York, Andrews has also started to offer his creations to eager customers. “If you can dream of a flavor, I can make it,” he said.

D’Andrews Bakery & Cafe is located at 555 Church Street, right next to the Downtown Public Library. For more information, visit dandrewsbakery.com.