When filmmaker Ken Burns announced that the subject of his next PBS mega-documentary would be country music, I’ll admit that I was very excited.  If you’re a Burns junkie like I am, you are likely willing to watch whatever it is that he and his team assemble for our viewing pleasure.

I’ve lost count of the number of times I’ve watched – in parts or its entirety – 1990’s hallmark The Civil War.  While not his first work, it’s certainly the one that made Ken Burns into a household name.  I’ve lovingly watched over the years as Burns has woven the tales of The Roosevelts, Baseball, Jazz, The National Parks, and the one with the closest impact on my life, The Vietnam War.

Living in Nashville, the thought of Burns turning his camera onto this utterly original American artform has left me almost giddy.  And when it was announced that there would be a concert to show off some footage from the documentary at country music’s Mother Church, the world-famous Ryman Auditorium, I was ready on the trigger to buy tickets.

There are nights that you know in your soul will go down in history and I am proud to say that this was indeed one of them.  And thanks to PBS and Burns, Wednesday night’s concert was recorded for broadcast (and I’d wager probable release) in conjunction with the September airing of the documentary.

What lies ahead this autumn is a sixteen-hour film examining the roots of country music and the multiple forms it’s evolved to become over the decades.  As Julie Dunfey, Burns’ co-producer, told the sold-out crowd, this project has taken eight years and will encompass excerpts from 700 hours of archival footage; 100,000 photos; and 101 interviews spanning some 175 hours.  She also proudly shared the news that the entire archive of materials will be housed at the Country Music Hall of Fame for future use.

Wednesday night’s concert was a chance for Burns to show off some highlights and to gather some of country’s most prominent names together to begin explaining the through-line of country music’s history that we’ll see expanded upon across the eight nights that Country Music will run.

From humble roots in the hollers and back-roads of America through the honky-tonk sound, to Patsy Cline and the “Nashville Sound” and onto the “Bakersfield Sound” and The Outlaws, Country Music promises to be the historical document that the artform deserves, thankfully preserving the men and women who made it before their voices are silenced by age.

Wednesday night’s concert ran nearly 2.5 hours with Burns speaking about the depth of the work behind Country Music, clips of the documentary itself, and the evening’s stars speaking of their histories, the people they knew, and the places that made country music into the widely-branched tree that we see today. 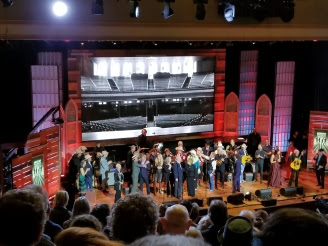 Of the concert’s many highlights, none for me surpassed Vince Gill’s rendition of Dolly Parton’s 1973 hit “I Will Always Love You.”  (Also, Gill led the house band for the show, a luxury pickup player if ever there was.)  Ricky Skaggs and Marty Stuart should always be near the top of the list when creating a concert such as this one.  No two men are going to have a better time than they are anywhere, clearly.  At age 62, Dwight Yoakam still wears painted-on jeans and has the moves he did thirty years ago.  And Connie Smith led the all-star cast in the finale of “Will the Circle Be Unbroken?” (which had to be recorded twice, the second time to a far emptier balcony).

The concert set-list included the following:

Ketch Secor and Rhiannon Giddens – “Ruby, Are You Mad at Your Man?”

Riders in the Sky – “Tumblin’ Tumbleweeds”

Holly Williams – “I’m So Lonesome I Could Cry”

Dierks Bentley – “Are You Sure Hank Done it This Way?”

Vince Gill – “I Will Always Love You”

Ricky Skaggs – “Don’t Get Above Your Raising”

Roseanne Cash – “I Still Miss Someone”

Entire Cast (Led by Connie Smith) – “Will the Circle Be Unbroken?”

Country Music, Ken Burns’ new 16-hour documentary begins airing on your local PBS affiliate beginning September 15th.  The Country Music at the Ryman concert does not have an announced date.

CLICK HERE FOR MORE COVERAGE RELATED TO THE RYMAN!

Financial Planning for the LGBTQ+ community

The new year has arrived. For many people, that means making resolutions and thinking of ways they can do better in the coming year and beyond. Money management and financial planning are often very popular resolutions and goals, but most financial advice tends to be aimed at heterosexual couples who want to grow their family and raise children.