When Mikey Corona and husband Brian Riggenbach started their underground supper in Chicago, Ill. they had the same vision in mind that they keep today: to create a warm atmosphere for friends to eat and enjoy each other’s company. Flash forward years later, and, even in the face of insurmountable adversity brought on by the COVID-19 pandemic, that space is still open for business.

A signature piece, the mirrored mockingbird by Chicago artist Phillip Vance, visually serenades patrons into the Nashville dining area covered in flowered wallpaper and classic blue cushioned booths topped in finished wood. It’s not a place you would expect to have experienced any recent hardships.

“We made the decision to close our restaurant before the first orders went into place,” says Corona. “We saw what was happening, and for the safety of all of our staff, we had a discussion with all of our business partners and we were kind of on the forefront of that.”

At just 2 ½ years old, The Mockingbird paused on March 17, shutting down operations and informed their staff they needed to file for unemployment as soon as possible. The couple then went into the kitchen and took all of the perishable foods to distribute to them, offering their staff as many resources as possible to get them through that period. The two bunkered down and waited, while finishing a few projects here and there to pass the time.

“There’s always something to do,” says Riggenbach. “There’s a million little things always on the list.”

The Mockingbird closed down completely for approximately two weeks, then opened back up for curbside, and many of the locals and fans of the restaurant came out to support them. They changed the menu slightly to fit the general needs of the community, transforming the previous business model.

“We have never been a to-go heavy restaurant,” says Corona. “Our venue is more of a place where people come for the atmosphere, the decor, the vibe, our staff’s kick ass personalities as well as the food, so that was difficult for us.”

After a surge of support for takeout in the beginning, the support slowly dwindled down as the pandemic went on. Corona and Riggenbach, both first time restaurant owners, suffered anxiety because of it.

“We spent the past 3 years creating this incredible team of employees, and you become a family, and you want to take care of every single one of them,” says Riggenbach. “In the kitchen, it’s less than ⅓ of what we are used to producing, so some of the positions just weren’t there to be filled.”

“Hard is an understatement,” says Corona. “We all sat in the room, it was quiet, there were tears. It was never ‘goodbye’, it was ‘we will be back together later’.”

The owners say there were some glimmers of hope where one day they would have 50 take out orders, and then the next day they would have two. What they describe as a roller coaster ride of emotions. Being a married couple, Corona and Riggenbach were not in the position of other couples, where one works in a different arena and can pick up some of the slack. They were in the trenches together, riding the same waves at the same time.

Takeout platforms like Grubhub, UberEats and Postmates can take a huge part of that revenue, which Corona estimates at about 30%, so if you have something that costs $10, and they take 30%, and your food cost is 25%, there’s not much room to do anything but break even. The alternative is to lose that sale, so it’s better for some restaurants to throw themselves on that sword. However, calling them directly to order takeout is always more helpful to the business. When you lose 70% of your customer volume to a pandemic, every dime is essential.

After reopening for dinner, stretching tables apart and reducing the menu by ⅓ and rotating seasonal items, the couple revisited foods on their supply chain that were less accessible. Masks were placed at the front door, increased hand washing policies set in place, sanitization stations set across the restaurant, signs were placed about social distancing, and disposable menus were laid out. Suddenly details like brand presentation and decor took a backseat to safety. 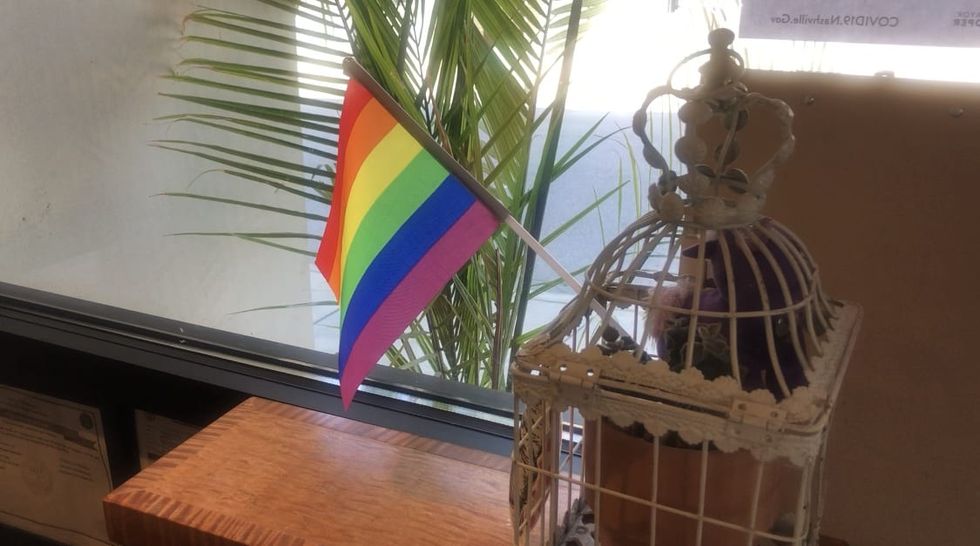 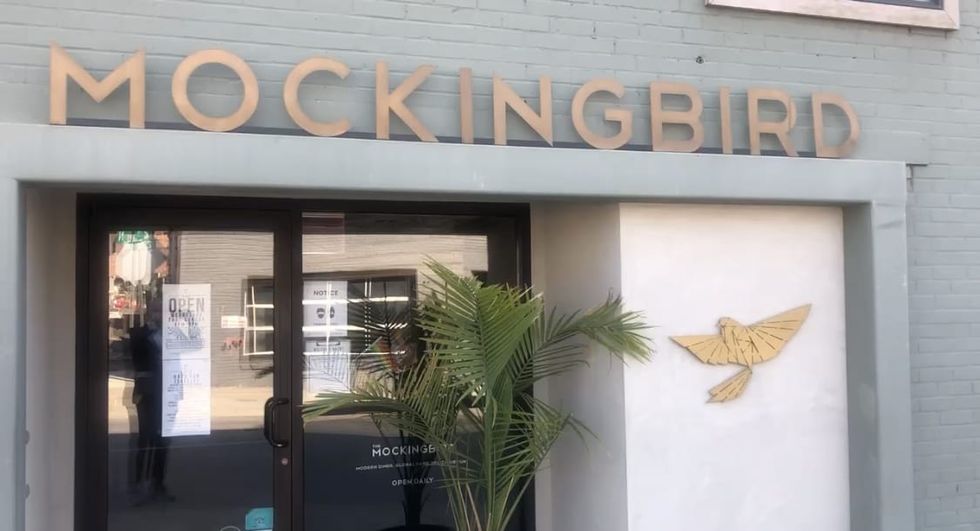 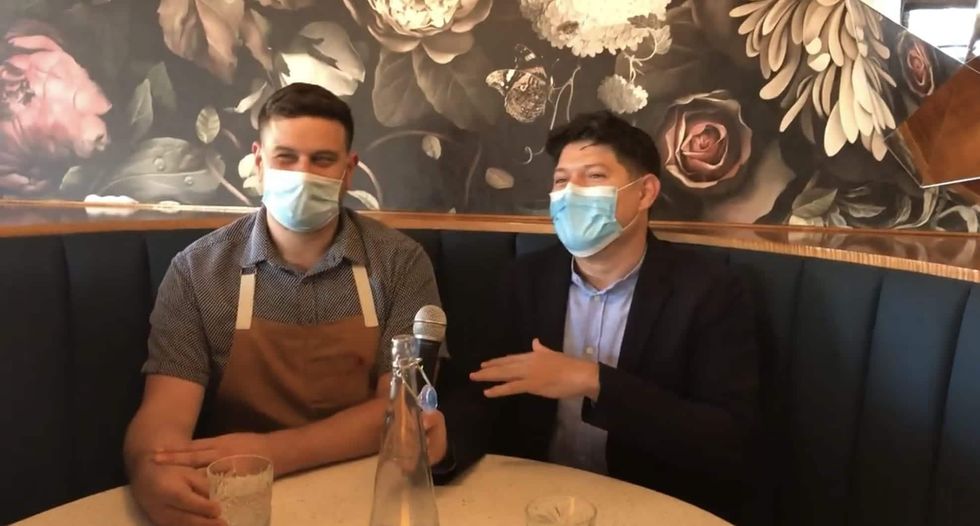 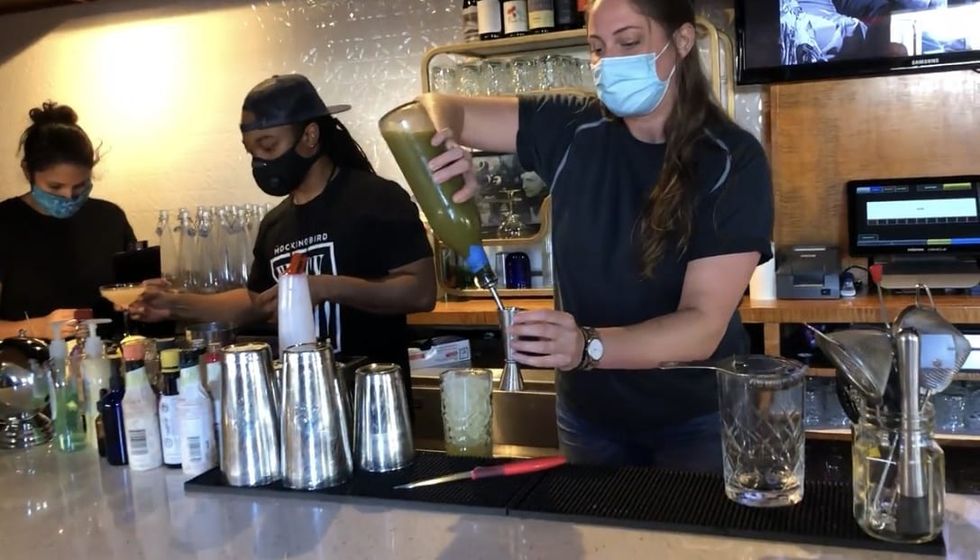 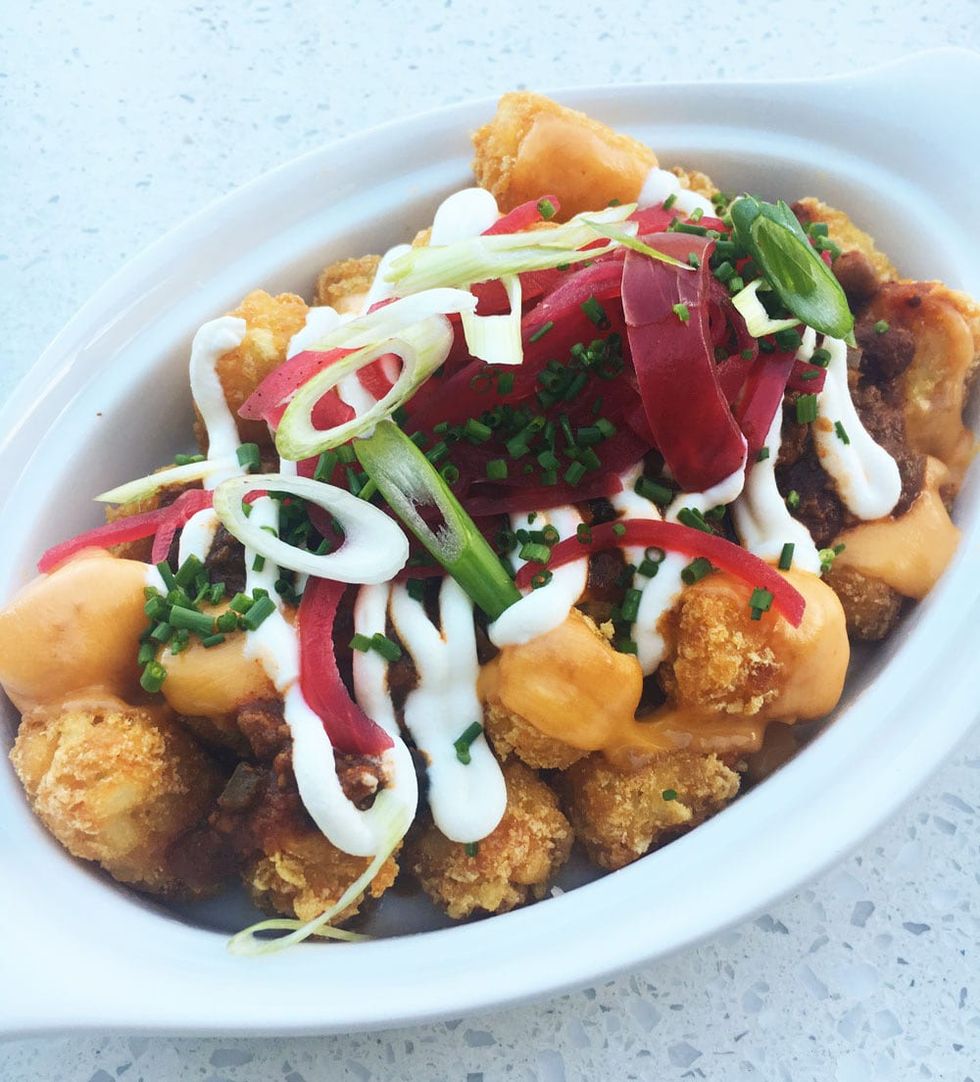 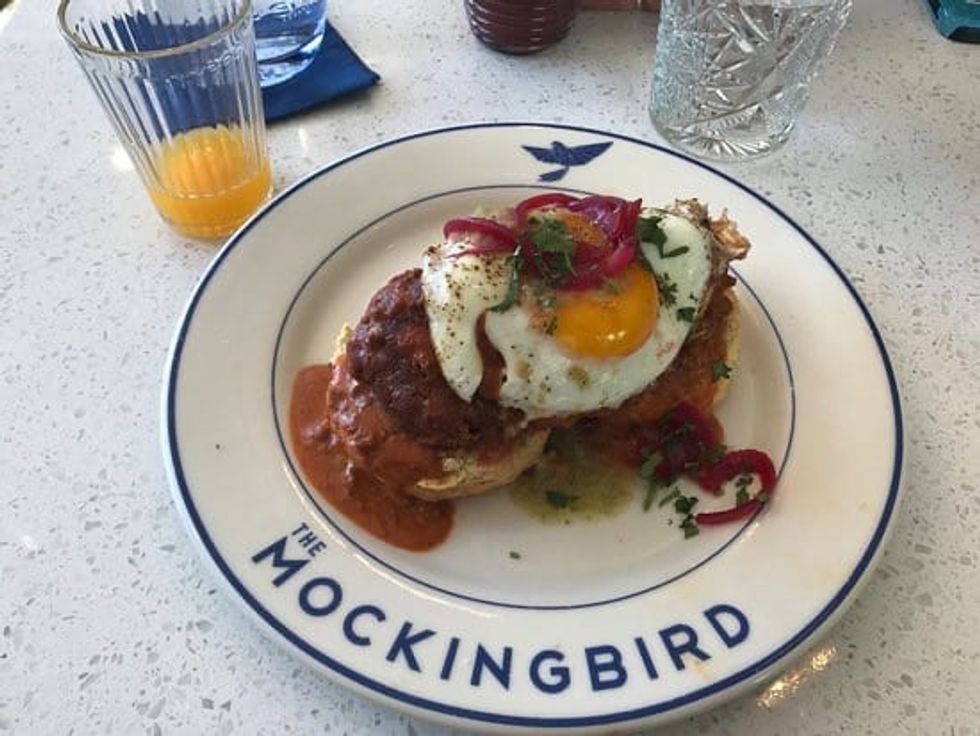 The couple fears that a second shutdown would be another gut punch that could be devastating, and right now, they have to give it all they’ve got. Riggenbach is doing all of the prep work and pastries himself, while Corona is running the front of the house, which has caused an increase in hours for both of them.

“We don’t do any work talk at home,” says Corona. “When Brian gets home, that’s sort of his time to set work aside. We have a new studio in our home, and he’s able to focus on his painting. My time that’s really helped me cope is in the afternoon, when I get to go home and visit with our dogs. That’s my time to just cuddle them, and it’s pure love and positivity.”

The federal relief helped, and the couple says they appreciate it, but compares it to a bandaid on a severed arm, and that the industry experienced a traumatic injury. It can’t be solved with an aspirin, we need a surgeon. They say our government needs to create new systems that re-examine how the crisis has been handled.

“This crisis has unveiled the restaurant curtain,” says Corona. “These are the margins we operate off of, and they are very slim. We’ve seen a lot more consideration from the public of what restaurants go through.”

The failure rate for restaurants is enormous compared to other industries. That rate in the United States is above 60% for restaurants in their first year, and 80% don’t make it past their 4th birthday. Nearly 16,000 restaurants across the country have permanently closed since the pandemic began, and that number is growing. The Mockingbird has continued to beat those odds for 3 years in a row.

The couple says before the pandemic, The Mockingbird clientele was 60% tourist and 40% local, and now their business is about 35% of that 40% local, with little to no tourists. Small businesses employ nearly half of private sector workers, with nearly 11% of those working in the hospitality industry. This awakening can put the number of multi-billion dollar corporations receiving tens of millions in federal PPP money into perspective. SEC filings turned up a total of 179 public companies, all worth over a billion dollars, that received tens of millions in aid.

The Mockingbird is not just a small business, but a safe space. The restaurant has not only hosted Dining Out for Life events since its inception, but numerous other events for LGBTQ causes.

“WE MISS YOU QUEENS!” says Corona. “Our community is what sort of gave us the confirmation that we were supposed to be doing what we are doing. That yes, this is why we are here. So we really wanted to create a second home for the community. It’s a relationship that we don’t take lightly, and we miss it terribly.”

A PRIDE flag sits at the entrance of The Mockingbird to greet all who enter, and the owners say it will be there when their family comes back.

Corona and Riggenbach had been together 15 years and were working their way through art school in Chicago when they decided to host supper parties in their Boystown home. Riggenbach would prepare the food, while Corona would set the table and lay out the atmosphere and performers. Their very first private dinner party was a “who’s who” of the Chicago LGBTQ community. The successful parties continued for 8 years before Riggenbach appeared on an episode of “Chopped”, and the couple decided to realize their Nashville dream.

The owners say they purposefully looked to foster their community, and at its core, the restaurant kept the goal of inclusivity in mind.

Corona and Riggenbach say the most popular items on the menu are the “Don’t Worry, Brie Happy” (a grilled cheese with whipped brie, jalapeno jam and chimichurri), “Rice, Rice, Baby” (a pimento cheese arancini with pickled pepper, grilled scallion and chamoy), but Corona’s favorite are the Tatchos (Lamb chili, beer cheddar, tater tots, scallion and crema).

“I grew up in South Texas and we have this dish called frito pies,” says Corona. “It’s basically Fritos topped off with chili and cheddar cheese. Brian, being my husband and a chef, sometimes will do things just to make me happy, so we put that on the menu. Happy Mikey, happy lifey.”

Actress and Producer Reese Witherspoon mentions the Totchos dish in her book “Whiskey in a Teacup”, in which she infuses Southern style, parties, and traditions she loves with contemporary flair and charm.

Favorite beverages at the restaurant include a drink sparked by their honeymoon in Havana, Cuba. The couple kept ordering mojitos during their trip and getting mint stuck in their teeth. When they opened the restaurant, they felt they needed a drink to commemorate that special moment, the Cuba En Fuego. The drink uses Havana Club Rum, mint and lime that’s been pureed and strained, and a jalapeno simple syrup to add a little feisty to the mix.

“Every time I serve it, it gives me that special moment again,” says Corona. “I’m taken back to that time and it’s a brief escape from whatever is going on at the time.”

One thing was evident during this interview before it began. Mikey Corona and Brian Riggenbach have a lot of love to give, and together they’ve created a warm space with great food, tasty drinks, an appreciation for diversity of taste, and a welcoming atmosphere for the community.

The Mockingbird is currently open for dinner from 5-9pm Tuesday-Sunday, with brunch on Saturdays and Sundays from 10:30am-3:30pm. You can make a reservation by clicking HERE and order takeout by calling them at 615.741.9900.