Many LGBT people feel alienated by Christianity, and it’s not difficult to reason why. In too many cases, Christianity as practiced by communities entrusted with the care of LGBT youth was the source of much of the hatred and abuse directed at those same young people. Countless young people lost their homes, their freedom (as they were sent to “therapy”), or their lives in the name of the religion that surrounded them.

The claim to authority that Christian leaders often make over the lives and lifestyles of all humankind rings hollow to those who simply cannot believe that a divine being could be so limited and so narrow as to honor only one way of life. The repression suffered under the banner of Christianity has led many to abandon religion and/or spirituality altogether. But for others, that lingering sense that there must be more out there, that there are greater truths originating in a more expansive divine, has led them to seek answers in alternative paths.

I know … I am one of them. As a child, I felt truly alone in my little world, and as a teen I opened that world up by exploring religions and cultures far beyond the Southern Baptist Christianity that surrounded me on every side—Episcopalianism and Catholicism were friendlier, but still too narrowly focused on a story that didn’t make sense to me. So I began reading and seeking far beyond—paganism, witchcraft, indigenous religions. I discovered a world much larger than anything I had known.

Ultimately, I veered toward something more culturally familiar—but really still just as strange to our culture. I converted to Judaism. But I never fully turned back—I spent my religious moments delving into the Jewish mystical tradition, itself rooted in pagan religions and philosophies.

Over the years, the more I talked to my fellow LGBT Nashvillians, the more it became clear that, while my story has its own unique arc, it is much more common in theme than I would have guessed.

But it makes sense. In a Christian world, where so many of us are disenfranchised from Christian power—or forced to submit to Christian norms to participate—alternative spiritualities are liberating. They celebrate the body, nature, pleasure, so many of the things we are taught to reject. Through this liberation, they are empowering.

Traditions of magic are empowering in even more senses—they don’t just liberate the mind, they offer people access to a direct connection to the cosmic forces that run beneath the surface of reality. They offer their practitioners the ability to influence the world around them directly. They turn the world from a source of fear into a source of strength.

Nashville is in the buckle of the Bible Belt, so when I began exploring the local scene of what I’m calling alternative spiritualities—by which I mean paganism, witchcraft (of many varieties), and mysticism—I didn’t expect to find much.

Instead, I found a thriving subculture. Just last month, Nashville held its annual Pagan Pride Festival, an event at Two Rivers Park that saw over 1,500 people come out and celebrate. The event featured multiple workshops and classes throughout the day, and gave attendees the opportunity to observe, or participate in, three rituals lead by members of various traditions.

Throughout the day, as I chatted with various attendees and introduced myself as the editor of O&AN, people would identify themselves to me as gay, bi, pan, trans, and others. LGBT couples abounded, and were able to freely and openly exhibit their affection. The atmosphere was welcoming and open.

This is a group of people who knows what it’s like to be on the outside and to need a safe place, too, and at Pagan Pride, at least, they delivered. One local pagan group even set up a “Rainbow Tent”—a refuge from the heat, and the bustle, for LGBT attendees. 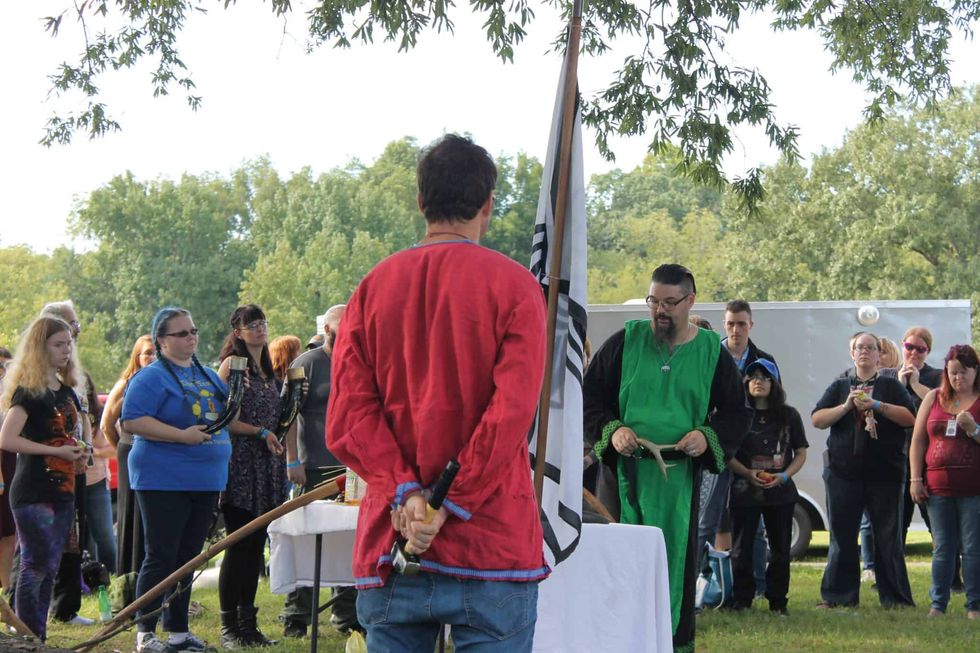 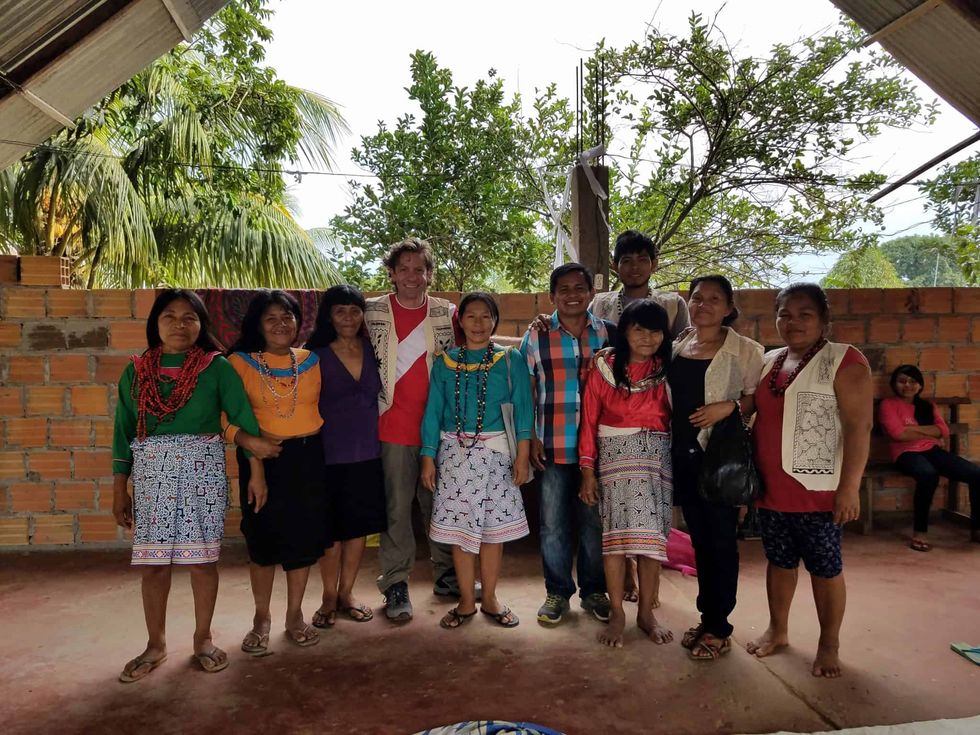 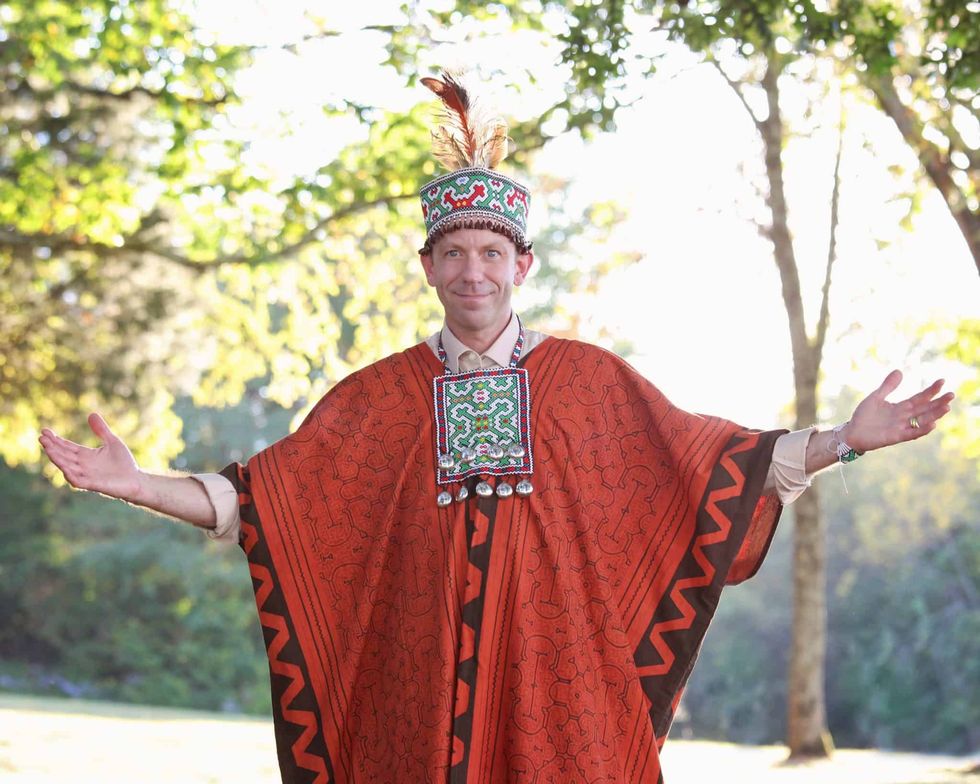 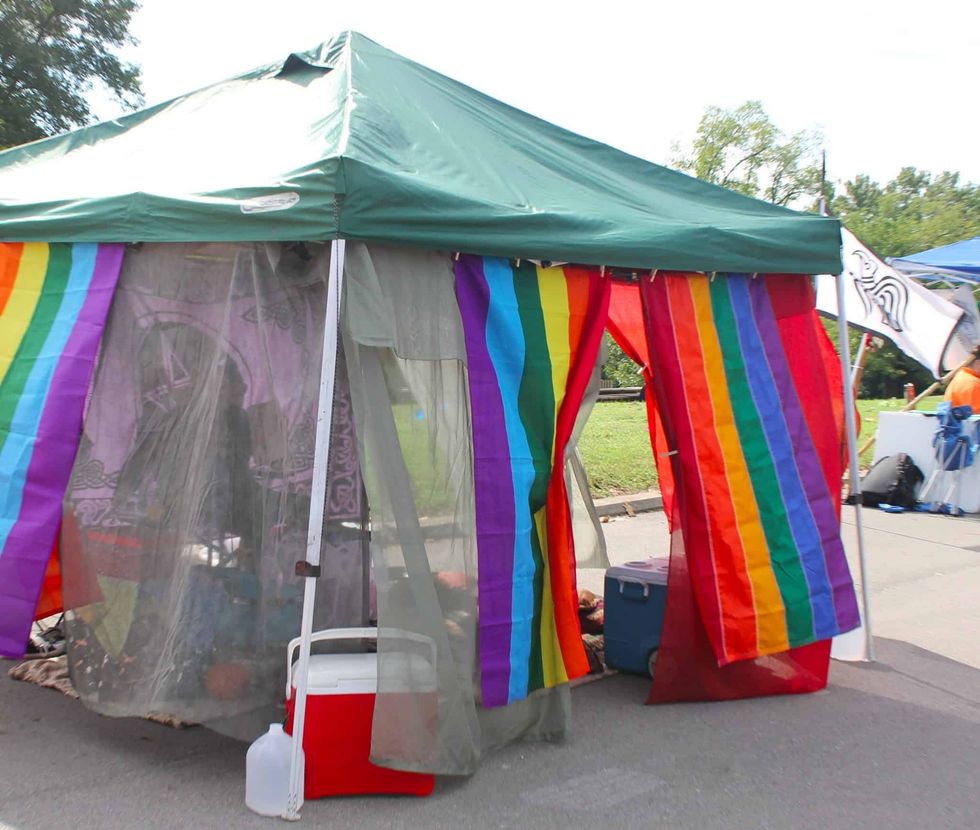 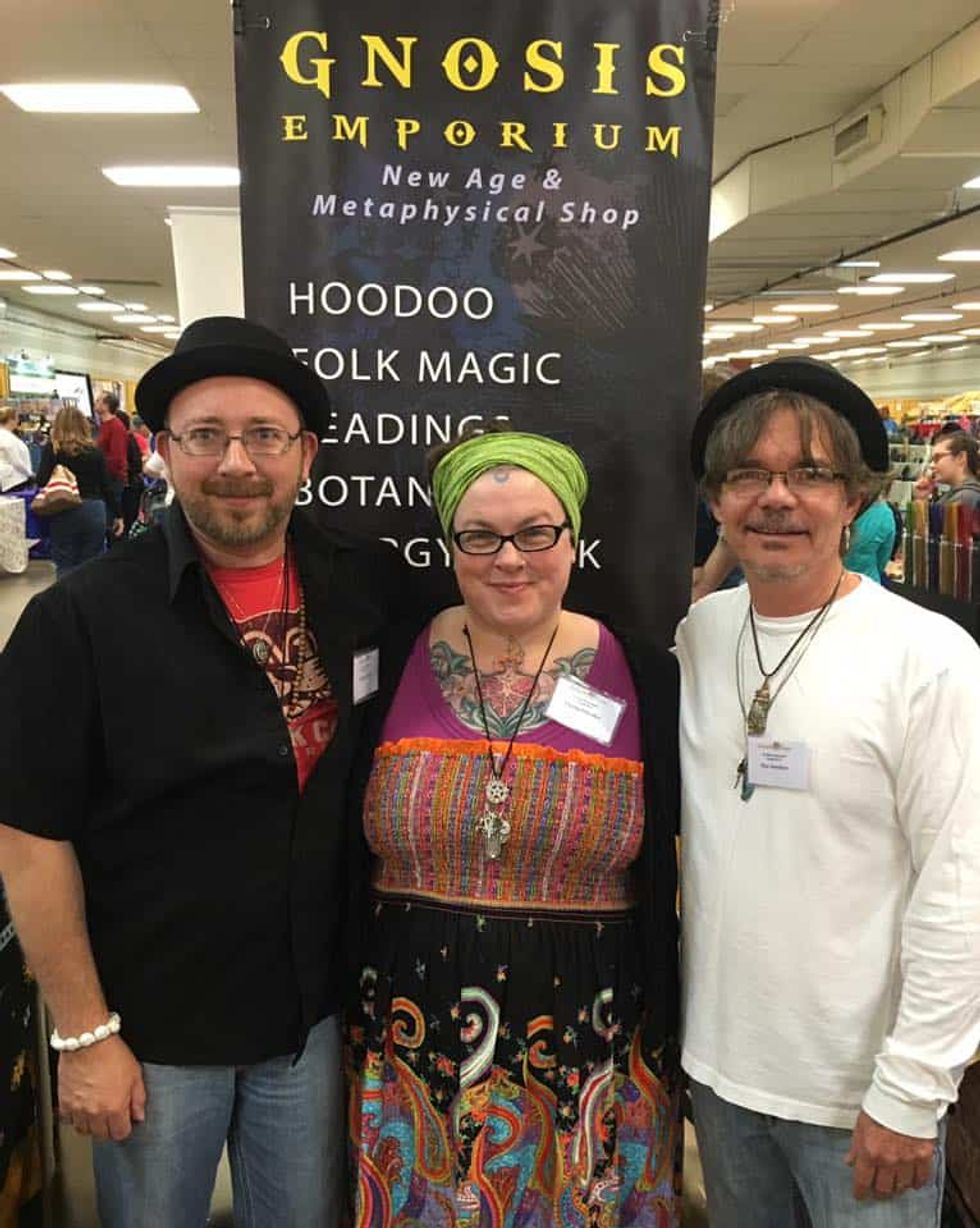 The LGBT community wasn’t represented among just the visitors to Pride—many of the vendors are also part of the tribe. I had the opportunity to speak with two different local vendors, living and working in Nashville, both owned and operated by gay men.

Jeff Crawford is a former Southern Baptist minister, who was involved in writing Sunday school materials for the denomination. The more involved he became in the denomination, however, the more he struggled with being gay. Over the course of time this completely disillusioned him with the tradition. From there, he sought refuge in another Christian tradition, in which he practiced as an ex-gay minister.

Ultimately, however, he would leave that path, as well, to pursue a different spiritual path. For a while he says he lost the feeling of connection with the divine, but after embracing the silence, he was able to reconnect.

“I started feeling the presence of God again,” he explained. “I didn’t actually hear a voice, but it’s as if you do because it’s so clear. And so I was like ‘Okay, maybe I’m not totally lost here.’”

His experience really began to change when he experienced a pastor who practiced healing touch, and who painted gods and goddesses and embraced the openness of the spiritual world. “That certainly didn’t match up with any theology I had been taught, so I got more involved and studied Reiki, energy centers, and how energy works…”

From there, Crawford studied other healing traditions, but truly discovered his calling on a trip to Peru. While traveling, he studied with a variety of Amazonian Shipibo shamans. In 2012, he was adopted into an indigenous clan of shamans and studied with his adopted father. After having a shamanic death journey, he was officially recognized by the tribe as a shaman.

Crawford’s story is at once remarkable for how far afield he traveled, as well as familiar in the sense of longing that drew him to something so different. Now, Crawford works as “Nashville’s Shaman”, practicing healing traditions, offering readings via Tarot and numerology, and teaching classes to seekers, from Reiki to Psychic Self-Defense.

The proprietors of AromaG’s Botanica took a different trajectory. Roy and Gregory Hamilton-White run a shop catering to a number of needs and interests. Their business began as a soap-making venture, but evolved into AromaG’s which sells a number of lines of their hand-made products, as well as teas, herbs, crystals, and tools and resources of interest to practitioners of various traditions of witchcraft and folk magic. And of course—aromatherapy.

Roy says he does identify as pagan, but, he clarified, “I do use the term loosely, because I do draw on many paths, pagan or other…”

Gregory, on the other hand, said, “I identified as pagan for 20 years, but when I became a Hoodoo practitioner, which uses the Bible, it got me more interested. Roy’s originally Catholic, so we started going to an Episcopal Church. I mean I believe different things at different times so we like to use the term Episcopagan.”

The two now attend the Unitarian Church when they do attend. So the trajectory is odd: Gregory was drawn nearer to Christianity-adjacent from his pagan background through the medium of a folk magic tradition!

The two are long-time vendors at Pagan Pride and note that it has grown significantly, both among regional pagans but also among curious outsiders as well. “It started with a small group of people, the same people every year. People from the surrounding areas would come and it was a way to connect, and see what the vendors provide. They always wanted the outside public to come, the curious, the questioning, kind of like [LGBT] Pride.”

AromaG’s has been hosting their own event for the last three years—the Tennessee Folk Magic Fest. Whereas Pagan Pride is focused largely on pagan and neo-pagan traditions, the Folk Magic Fest focuses on education about traditions like Hoodoo and Voodoo, Gregory’s specialty. It’s held at the shop, and workshops in the adjacent Yoga studio are led by experts in the field who are invited in. It’s much smaller than Pagan Pride—there’s even a potluck—but the educational experience is top notch, and the atmosphere is welcoming and relaxed.

Nashville Pagan Pride is like a look at what LGBT Pride was a decade or two ago. That community reflects ours in that it is marginalized, driven into the shadows by the dominant culture. As such there is much overlap, and a lot of welcome for those seekers who have been left doubly homeless. Sometimes it’s easy to forget that, even in Nashville, the choice isn’t Christianity or nothing. There’s a whole world of truth-seekers out there on their own paths, some of which may call out to those without a spiritual path of their own.

There are so many other LGBT practitioners, Tarot readers, and spiritual guides, as well as LGBT friendly covens and circles in Middle Tennessee, we could never feature them all. But if you have a story about your experience with one of these, or are interested in a feature, contact the editor at jgrady@outandaboutnashville.com.

For more information on Nashville Pagan Pride, visit nashvillepaganprideday.net. Jeff Crawford’s website, NashvilleShaman.com offers more information about his services, and AromaG’s Botanica’s offerings can be viewed at aromagregory.com, or in the shop at 223 Donelson Pike.

For more in-depth interviews with Crawford and the proprietors of AromaG’s, see O&AN’s website later this month!