Review: "The Book of Mormon" at TPAC

When Jesus Christ Superstar opened on Broadway in October of 1971, the musical was met with nightly protests on the sidewalk in front of the Mark Hellinger Theatre on 51st Street.  Conversely, when The Book of Mormon opened at the Eugene O’Neill Theatre in February 2011, it was lauded as one of the best musicals of the yet young 21st century.  Thus passes the glory of the world, eh?

While Superstar dared to imagine Jesus as a mortal with deep doubts and momentary lapses of faith, Mormon… well, let’s just say that Jesus calls one of the musical’s lead characters a dick near the top of the second act.  But what else would one expect from Trey Parker and Matt Stone, the creative forces behind the long-running television hit, South Park? 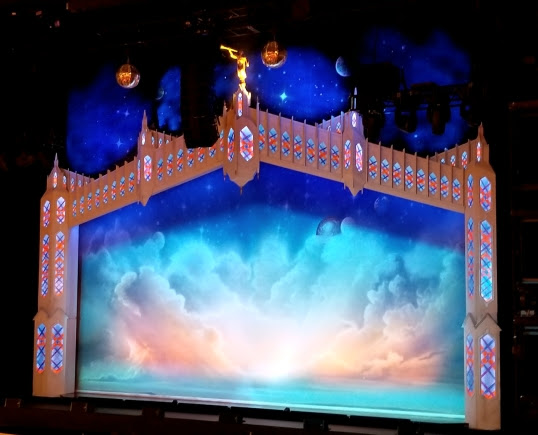 I know no one could have expected the irreverent humorists to team up with Avenue Q‘s Robert Lopez to create what was, at least before the coming of Hamilton, the most original musical to hit Broadway in years.  But The Book of Mormon stormed into New York and has remained a solid hit, minting its own money for the past eight years.  On the road, the show regularly haunts houses around the nation every couple years, establishing its place alongside Wicked as an almost annualized ritual for some cities.

So it’s with great humility that I’m about to share the following piece of information:  Until tonight at the Tennessee Performing Arts Center’s Andrew Jackson Hall, I had never seen The Book of Mormon.

Of course, I knew the score, vividly remember Andrew Rannells’ performance on the 2011 Tony Awards, and have been well aware of its presence on tour and on Broadway.  I just never quite got around to seeing it until now.  (If there is a sense of irony to any of this, it’s that Jesus Christ Superstar was the first musical I ever saw.  For whatever that’s worth.)

Leading the stellar cast as Elders Price and Cunningham are Liam Tobin and Conner Peirson.  The classic odd-couple, Tobin and Peirson lead us on their missionary adventure to Uganda along with a troop of other young Mormons.  The ensemble plays the other young missionaries with such a fresh-scrubbed (with Ivory… ninety-nine forty-four one hundred percent pure, naturally) sincerity that their zealousness feels heart-warming and genuine.

Kayla Pecchioni’s Nabulungi – variously referred to by Elder Cunningham as Nicki Minaj, Neutrogena, and other hilarious malapropisms – provides the beating heart to the story and is a standout among the large cast.

Casey Nicholaw’s show choir on speed choreography turns up the wattage on the smiles and movement, which only serves to heighten the notion that the entire cast lives on Four Loko and Pixy Stix.  Scott Pask’s sets have been effectively adapted for the road and Ann Roth’s costumes are, at times, gut-bustingly funny.

And in case you hadn’t yet heard, this musical is probably not one you want to take your younger family members to see.  It doesn’t so much toe the line of vulgarity and blasphemy.  Think of it gleefully stomping all over that line.  You’ve been warned.

The Book of Mormon continues at TPAC’s Andrew Jackson Hall until Sunday.  There is a ticket lottery and details can be found at the TPAC website.