Nashville
Our Community, Our Voices
StylePersonal CareFood and DrinkWellnessHome and DesignTravelOUTdoorsSocietySports
OUTvoices may earn a commission when you buy through links on our site.
Booking.com

The 3 Best Locations in Thailand for Wellness and Relaxation

The Dinah is Celebrating 31 Years This Weekend

How the Dobbs Decision Could Impact LGBTQ+ Healthcare

Why The Latest Thor Is Another Disappointment For LGBT+ Fans

An Adventure of a Lifetime

“When you’re falling in a forest, and there’s nobody around—do you ever really crash or even make a sound? On the outside always looking in, will I ever be more than I’ve always been?” —  Dear Evan Hanson

For as long as I can remember, my life has been in a constant war between dualities: the side of me that needs security, comfort, and structure and the other side, the one that has an insatiable thirst for experiencing the unknown and the possibility of life-altering adventure. It’s as if there’s an invisible scoreboard in my soul, tallying each side’s wins and losses, but never actually reaching a definitive conclusion.

A couple of consecutive failed relationships reflected these dualities: one was with a man that offered comfort, but ironically brought out my own very deep insecurities, and the next was with someone who enticed me with his mystery, only to manipulate those insecurities to maintain the mystery he never intended for me to uncover. Both relationships, I realize now, were attempts at filling a void inside my heart that wasn’t meant to be filled by anyone but myself.

Any attempt at earning love is always attempted in vain, and any fight to feel love is always fought in vain. Those are two life lessons I will spend the rest of my life thanking whatever gods may be for making me understand early and painstaking thoroughly.

The morning I began the Appalachian Trail was a morning very much like any other—meaning that I woke up and journaled about my excitement, only to have that excitement slowly turn into nervousness and eventually morph into anxiety-ridden terror as the day progressed. This is essentially the story of my life.

As the shuttle driver transported me and four other thru-hike hopefuls the half-hour to the starting point in Georgia, Amicalola Falls, he said exactly one sentence: “I’m available if y’all  need me to come back and pick you up: most of my passengers only make it one day.”

Naturally I assumed he was speaking directly and only to me. Sitting in a van with several “outdoor bros,”looking like Patagonia-sponsored Army rangers—you know the type—I slowly grabbed one of the shuttle driver’s business cards, just in case. I have this incredible talent for always assuming and preparing for the worst-case scenario and, also, for betting against myself. I’m the type that always takes the jump but has also already factored in the high-likelihood of everything going wrong after I do.

When I got to the Falls, the park ranger took one look at me and immediately said he would like to help me with a pack shake-down. For those who don’t know, that means I brought way more shit than I needed, and he was probably internally laughing at my finishing odds.

After throwing away about 6 pounds of items from my pack that I still think would have been worth the weight (just saying...still bitter), I walked through the infamous arches and began my journey. The trail begins with 604 stairs to the top of Amicalola Falls, the tallest cascading waterfall in the South (of course). Within approximately 20 minutes I was already wondering what fresh hell I had gotten myself into—a foreshadowing, I now understand, of the journey to come. I slowly but surely trudged the 8.8 miles to Springer Mountain Shelter, where I would spend my first night and meet a few people I hiked the next 200 miles with.

I could simply say that we all just decided to stick together—friendship found me, etc. While that is true, the more honest truth is that I needed these people to teach me how survive as a thru-hiker. I think I instantly knew that, after that first day. 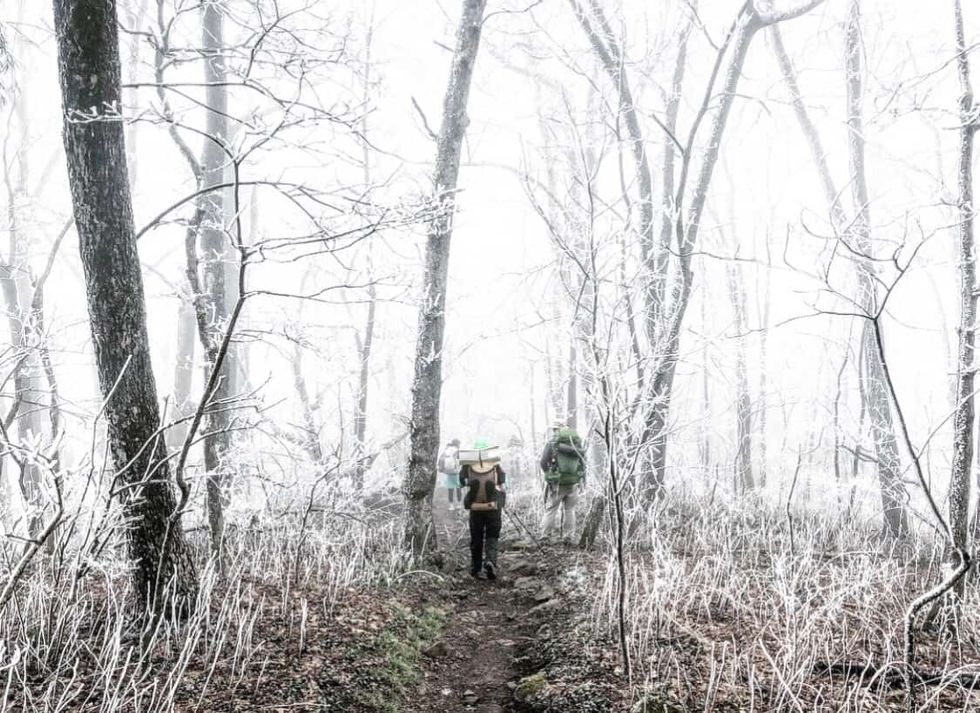 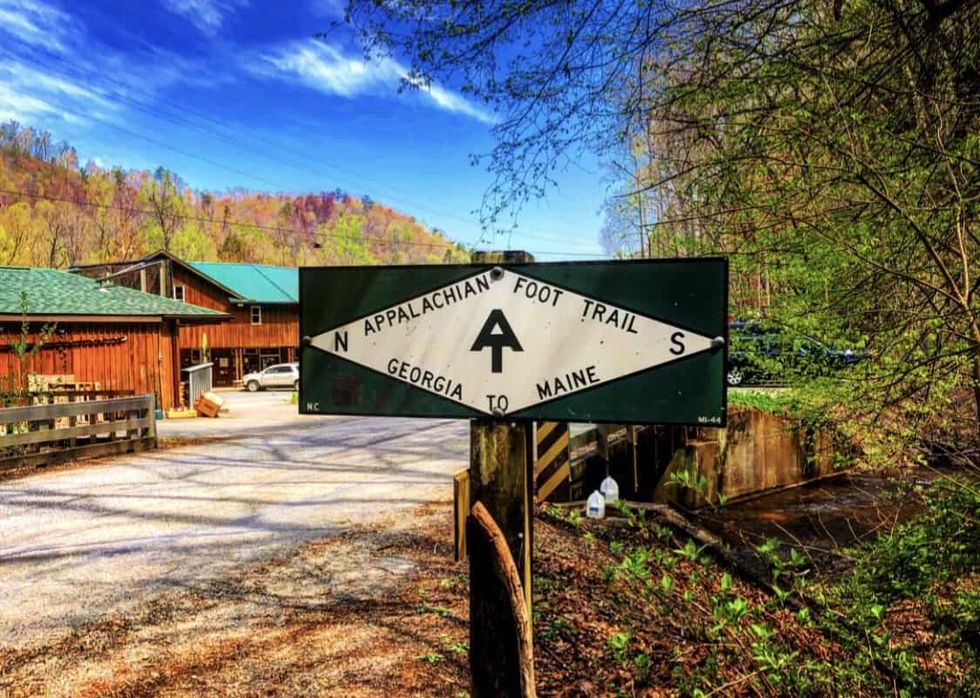 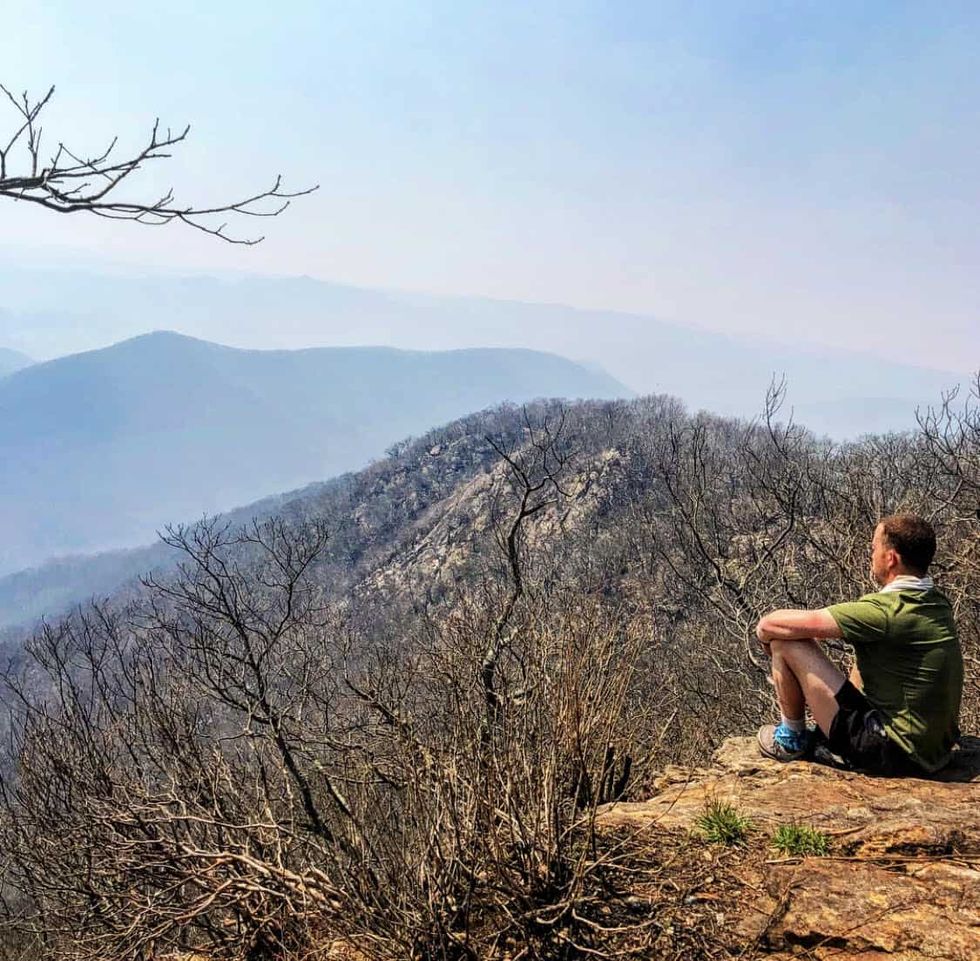 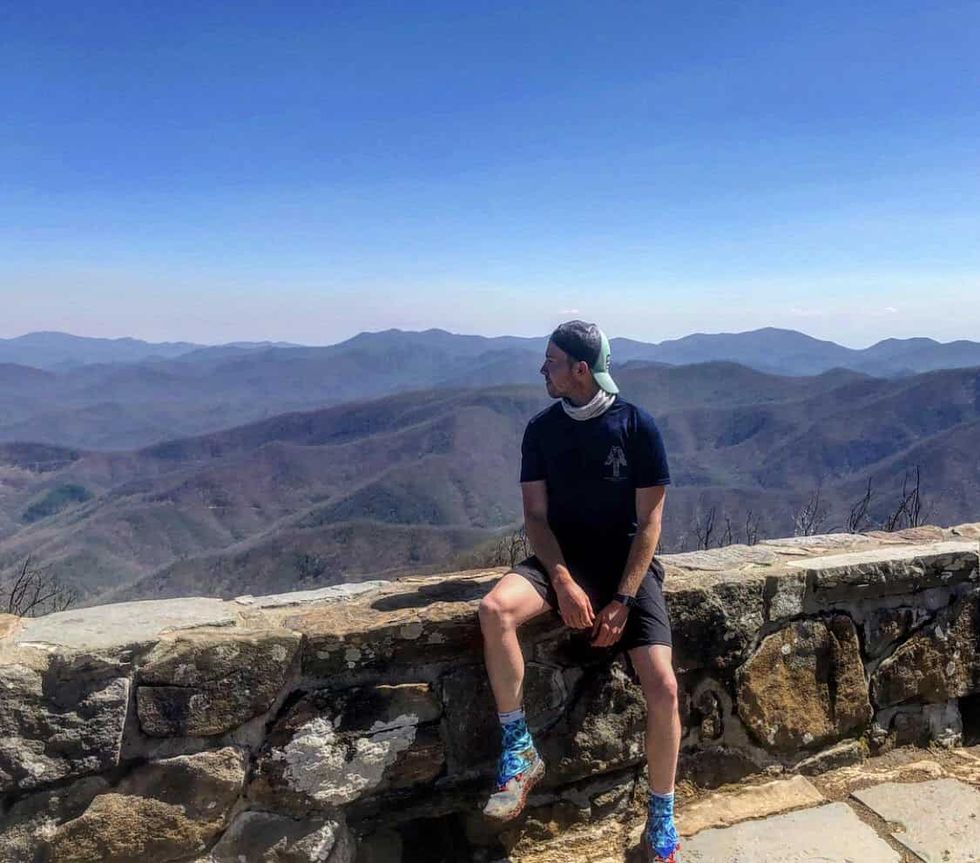 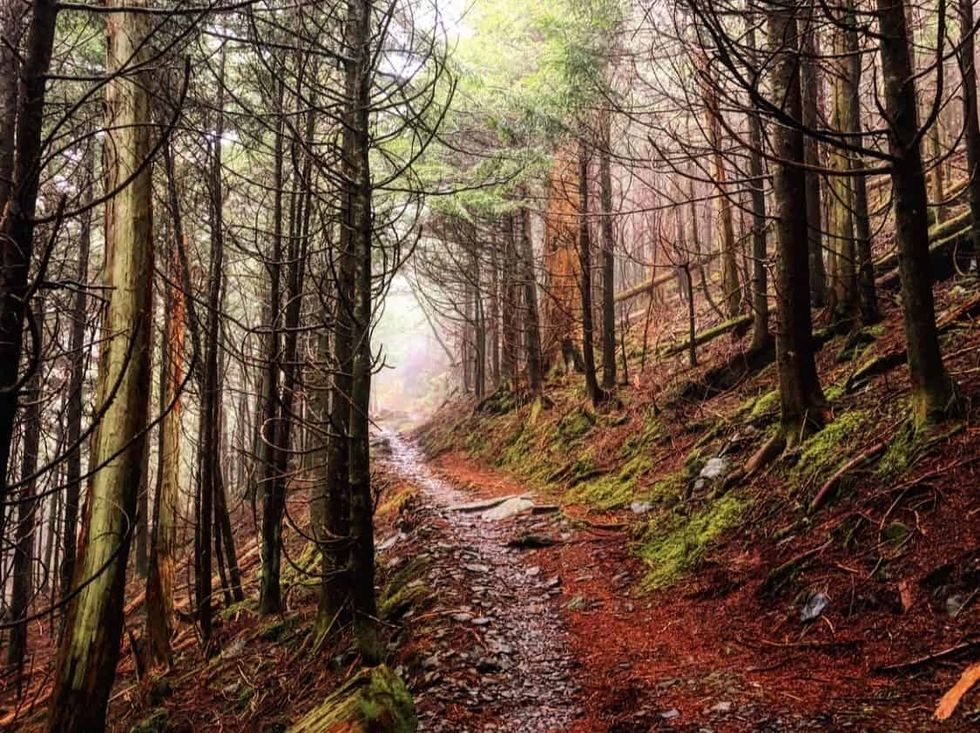 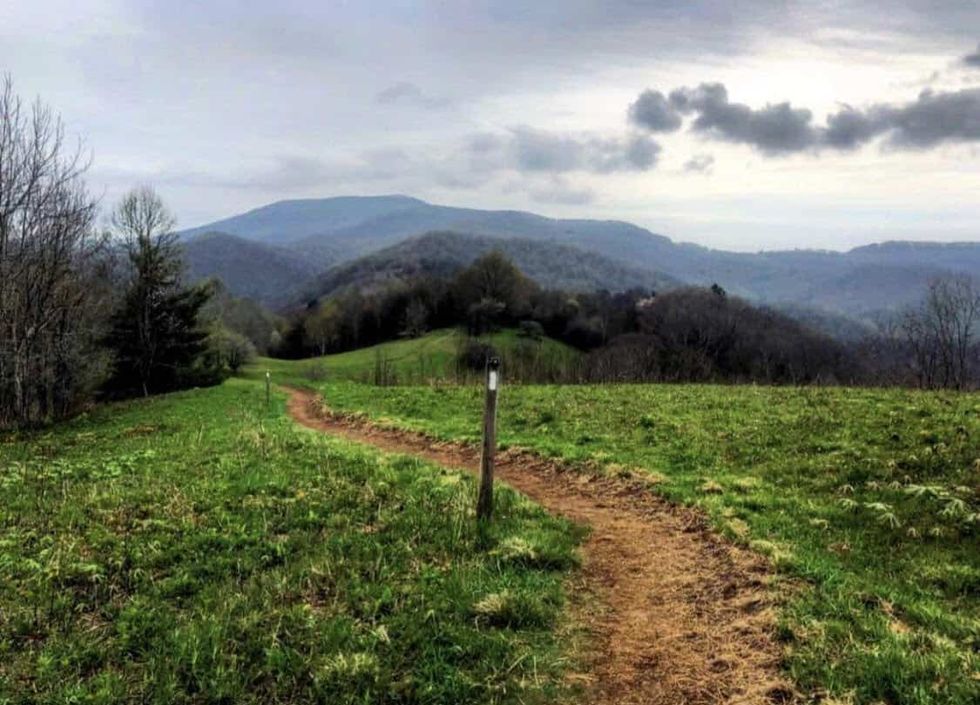 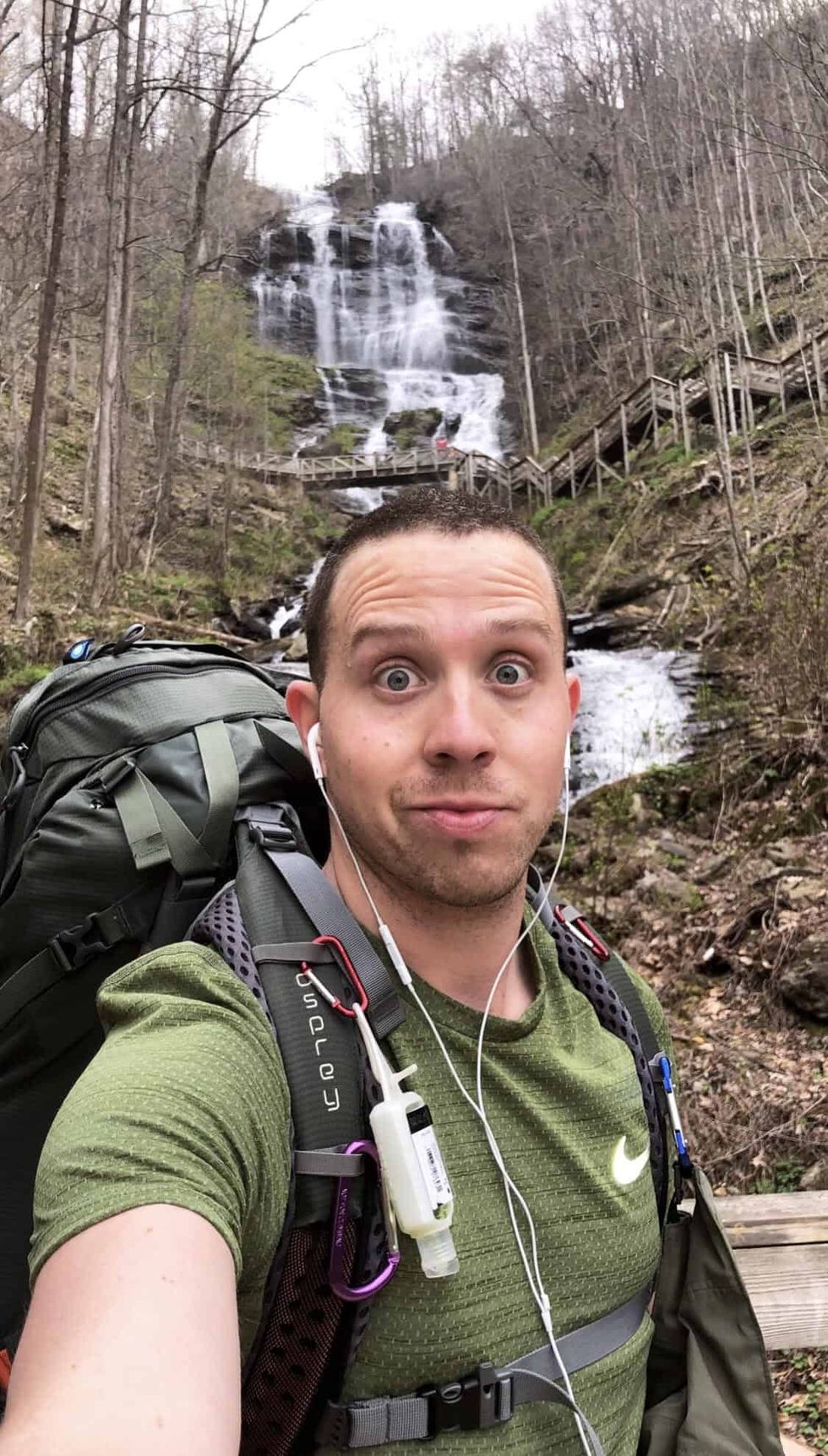 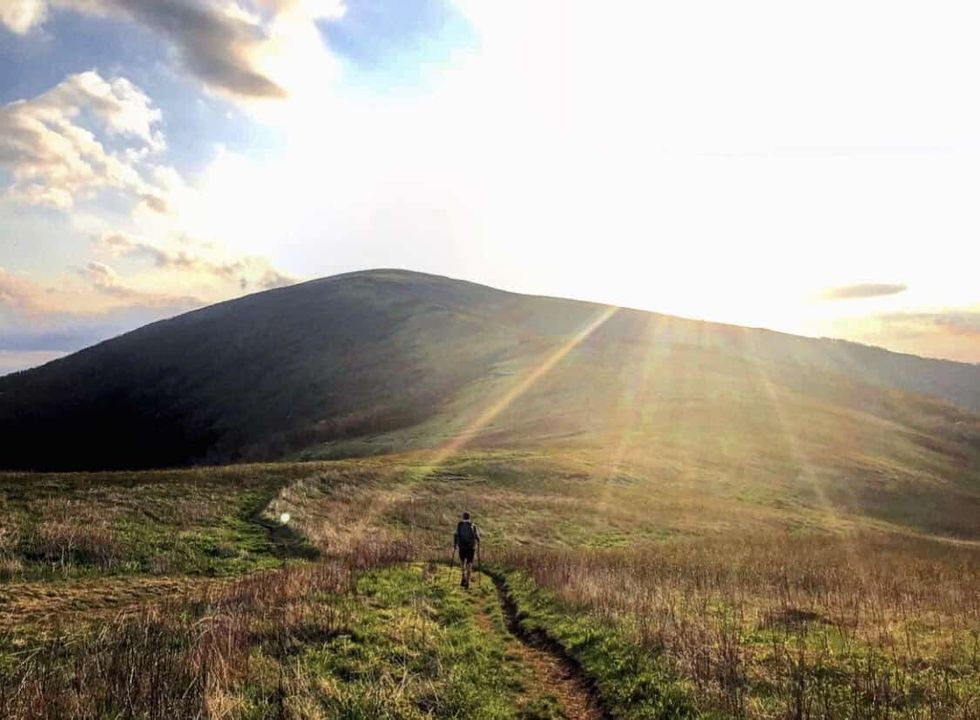 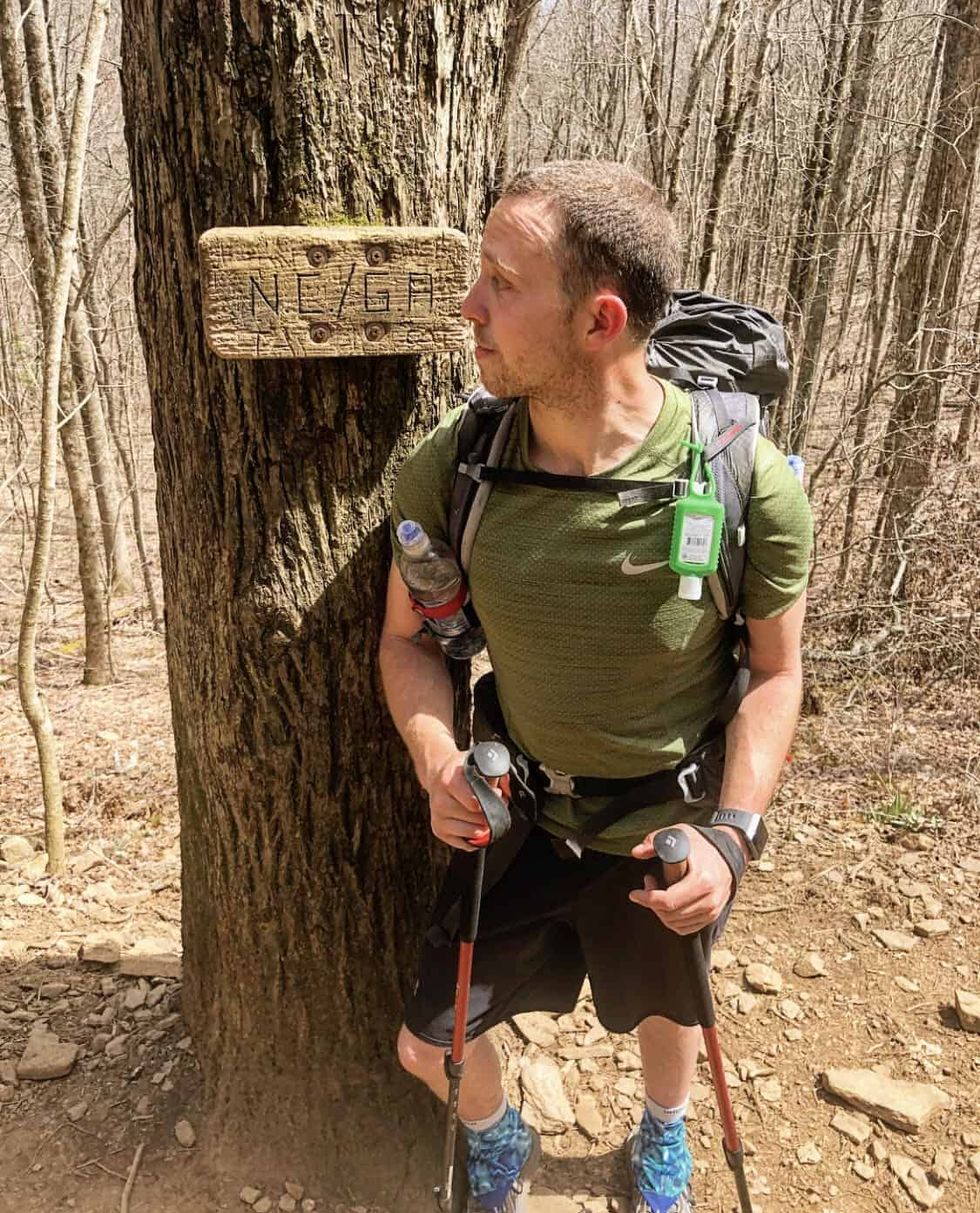 So we three stuck together: the guy was one of those “outdoor bro” types I spoke about earlier and the other was one of the most badass females I’ve ever met. Both seemed to know everything about survival and backpacking. And then there was me, the lone gay boy who had never done anything like this before.

Needless to say, I needed them far more than they needed me. We formed what is known in Trail Terms (there’s a lot) as a “tramily,” a Trail Family. These naturally form over the course of a thru-hike for many reasons. Survival, loneliness, love, grief, boredom...you name it. We all go out there for different reasons, but humans are social creatures; we find connections even in the most remote circumstances. We adapt in order to survive.

We would hike alone, but meet up at a pre-determined destination on trail for camp at night. I started out doing 8-10 miles a day, slowly increasing my daily mileage as my body adjusted and my mind started seeing this as a challenge to overcome.

One of the things they don’t tell you before beginning a thru-hike is how many people look at this as a competition or a race. I’m not really sure why, but they do. Somewhere in America right now, there’s a guy who finished the entire trail in 45 days. That’s an average of over 48 miles per day, with no days off.

It’s very difficult not to fall into this trap of constantly comparing yourself to everyone else out there. There are a couple sections of the trail where I fell into that mentality, and, because of it, I remember very little about what I saw on those days. But the trail is a microcosm of society at large. Even as we are completely removed from civilization, the “keeping up with the Jones’” mentality is still very real, especially in the beginning.

I lost count of how many introductory conversations I had with fellow thru-hikers that quickly fell into the following sorts of conversations: gear brands, pack weight, or hiking pace, or, as I like to call it, the trifecta of comparison on the Appalachian Trail. But, as the saying goes, comparison is the biggest thief of joy. And I was out there to find my joy. Therefore, I also lost count of how many times I had to say “F### off, Satan... I’m out here for only me,” so to speak, and march my joy-deprived a## on down the trail.

Those first couple hundred miles were nothing short of every worst-case scenario I planned out in my mind. The terrain was more difficult than I thought possible. I was in worse shape than I realized. I was clumsy and extremely injury prone. It was really fucking hard, and I didn’t know how I would succeed or how much I could handle.

That’s also precisely what pushed me forward. Within the first couple hundred miles, every self-limiting thought came erupting to the surface—thoughts that I had pushed down for a very long time, or listened to most of the time. Insecurities that told me that I wasn’t good enough, thoughts of inadequacy, and doubts of my abilities—they all came up, because those thoughts aren’t limited in scope simply to relationships or other areas. They are omnipresent in life.

I knew that in order for me to finish this thing, I had to face each and every one of those challenges and thoughts and overcome them. I knew that these self-limiting beliefs would stop me.

The only way is through, as they say. So I marched my little a## “thru”.

Read part one of this story at An Adventure of a Lifetime!